Fido and Friend in Five: Thanhha Lai and Pico! 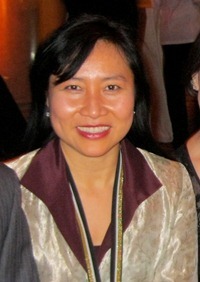 All of us in the library world and, to some degree, the children's author world, anxiously await the announcement from the American Library Association about the year's big winners. So many prestigious awards are announced at their mid-winter conference: The Michael Printz Award, the Coretta Scott King award, and the highly coveted Newbery and Caldecott awards. Every year we all comprise our own lists of winners and honors. Once the awards are announced, we cheer for our favorites and shake our heads over the ones overlooked and the ones not on anyone's radar.

I cheered loudly yesterday when it was announced that debut author, Thanhha Lai, had won a Newbery Honor for her breathtakingly and heartbreakingly beautiful book, Inside Out and Back Again. This is probably my favorite children's book of the year. It has all the elements of a perfect book I look for: spare yet evocative writing, strong voice, bravery, a dash of humor, multi-faceted characters, and honesty. I'm not the only one thinking this is an almost perfect book: Lai's semi-autobiographical novel in verse also won the prestigious National Book Award!

Like Thanhha herself, the main character in Inside Out and Back Again, flees her home in South Vietnam with her family just before the fall of Saigon in 1975 when she is ten. They eventually land in Alabama, where Ha, the narrator of this evocative story, goes from being a secure, brave, and smart girl to feeling just the opposite. It was a pure pleasure to watch Ha and her family, over the course of a year, gradually adapt in their new home. As Lai said in a recent School Library Journal interview, it took her closer to a decade for "confusion to turn to hope" in her new life in America.

It took Lai fifteen years to write Inside Out and Back Again. During that time, she acquired degrees in journalism and writing, a husband, a daughter, and a lovely white Havanese named Pico. I can't begin to tell you how honored I am to have Thanhha and Pico in today's Fido and Friend spotlight! 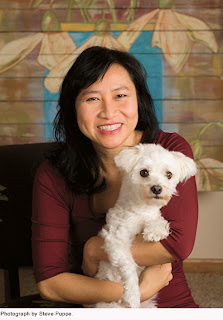 1. How did you and Pico find each other?  My previous dog, Kiki, just died and the house was so quiet and sad that I knew I had to have another dog, ASAP. The next day, we found a breeder in Brooklyn. She brought out three puppies and one ran straight to us and started biting my sleeves. He was growling and wagging his tail and head-butting me. Oh, that milky puppy smell and those dart-like puppy teeth. I looked at my husband and said, "That's our dog."

2.  What makes Pico's tail wag?  It doesn't take much: door bell ringing. After venturing to the backyard for even a minute, wags for a chicken stick. My daughter (his sister) coming home on the school bus. Any dog. Any human. Any squirrel. The mention of the word "chicken." Package crinkling from any kind of cheese. Anything at all.

3. What's your all-time favorite dog story?  The first book I read in English was Where the Red Fern Grows. The image of two hounds forever resting side by side has been seared into my consciousness.

4. If Pico could change just one thing about you, what would it be?  Oh, he wouldn't be able to pick just one. There's my habit of bringing him along on jogs so he could file down his nails. He would rather be pushed along in a stroller, preferably with the shade down. And the nails, well, why worry about such silly things. Then there's my other annoying habit of cutting his fur and bathing him. He fancies himself a hippie scholar who's above looks and hygiene. This is why he bites professional groomers. Of course, there's the indignity of not sitting at the table with everyone else and not having a steak or chicken fillet all to himself. And the worst offense of all: leaving him home alone to look longingly out the bay window. Goodness, don't I understand he needs to be out and about to deepen his study of all things living and dead, especially sun-baked worms?

Many, many thanks to Thanhha and Pico for visiting Fido and Friend in Five! I'd say The Year of the Dragon is off to an auspicious start!
Posted by Bobbie Pyron at 8:28 AM