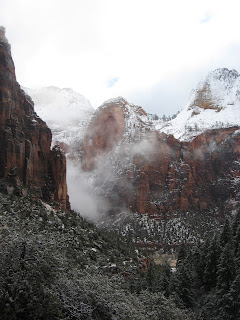 Well, this month has been National Poetry Month, and the end of my long library career! My last day as a librarian was April 16th. The library threw me a nice party and I received some very special gifts and cards. One in particular, though, touched me deeply. My very good friend, Lora Koehler, gave me a card with Edward Abbey's (one of my favorite authors and eco-troublemaker) "Benedicto" on it.

Like me, Lora is a person who loves the high wild places and feels more comfortable out of doors than in. She's also an amazingly gifted writer. You'll be seeing books from her in about 18 months. She knew this would resonate with me. I thought I'd share it on Random Notes in celebration of National Poetry and to setting off on "crooked, winding, lonesome, dangerous" trails that lead to "the most
amazing view."

May your trails be crooked, winding, lonesome, dangerous,
leading to the most amazing view.
May your rivers flow without end,
meandering through pastoral valleys tinkling with bells,
past temples and castles and poet's towers
into a dark primeval forest where tigers belch
and monkeys howl, through miasmal and mysterious swamps
and down into a desert of red rock, blue mesas,
domes and pinnacles and grottos of
endless stone,
and down again into a deep vast ancient unknown chasm
where bars of sunlight blaze on profiled cliffs,
where deer walk across white sand beaches,
where storms come and go
as lightning clangs upon the high crags,
where something strange and more beautiful
and more full of wonder than your deepest dreams
waits for you--
beyond that next turning of the canyon walls.

One of the many things I've come to love about doing these Fido and Friend in Five spotlights is  the journey that led the person and their dog to each other. So many times, it's often almost magical and, dare I say, even spiritual, the way these two beings are brought together in this world.

Cindy Christiansen writes wonderfully fun, suspenceful romance novels that often feature dogs. She's a member of the National Romance Writers of America, has published three books which have won numerous awards and legions of fans. Like many of the authors spotlighted on this blog, writing was not Cindy's first profession. She started out in computers and worked her way up as a programmer/analyst for an aerospace company. Although Cindy had always dabbled in writing (plays, short stories, magazine articles), it wasn't until her health came crashing down and she was bedridden that she wrote her first book. Cindy has been diagnosed with over 30 health conditions, but she hasn't let that stop her. "These illnesses can challenge a person both mentally and physically, but that doesn't have to stop me." She takes her inspiration for Laura Hillenbrand, author of Seabiscuit and Unbroken, both books that have sold millions of copies and spent years on the New York Times Best Seller list.

Why does Cindy write the kind of books she writes? As she says, "I believe a book should put you through all  the emotions, provide a happy escape, and also teach you a little something." She says all of her books include dogs because "life wouldn't be life without them."

1. How did you and Sprite find each other?
When my brother passed away, we adopted Smokey, his wonderful Schnauzer. We had him longer than my brother, and was also the last link to my family and our farm. When Smokey died of liver cancer, my little family was heartbroken. Within a week, I went in search of a new puppy to adopt. I usually adopt from shelters, but for some reason, I felt the urge to check out this place called The Puppy Palace near our home here in Utah.

The conditions were deplorable! The place smelled horrid, the animals weren't being seen to, and the teenager running things didn't care. (This particular "store" has, thankfully, been closed down).

Although I wanted a female, I spotted this gray fur ball much bigger than the other puppies and asked to see him. He stunk to high heaven. The girl said the was seven months old but, in fact, he was ten months. He had a growth on the side of his head and needed surgery. No one wanted to adopt him. It broke my heart.

I took him home and gave him a bath. He still stunk. Five baths later, he still had a slight ordor. He had surgery to remove the tumor, but we could tell right away there was something different about Sprite. We soon learned that during his first ten months, he had been badly abused, even to the extent of brain damage. At three, he started having seizures and is on multiple medications, all because of the abuse.

Sprite abhors any buzzing or beeping sounds, barks constantly at everyone, forgets how to do things he's done before, and doesn't like to be touched unless he touches you. Would I do it again? You bet. Sprite brings a lot of joy to our family and he deserves a good home.

2. What makes Sprite's tail wag?
His tail is nothing more than a stub and that's what we call it. He wags his stub mainly for food. He's a fiend for jelly beans, potato chips and popcorn, although we don't feed him much of anything except his special diet these days.

3. What's your all time favorite dog story?
I've read so many good ones, but the one that sticks out in my mind the most was reading Where the Red Fern Grows. My mom, sister and I got to the end of the book where Old Dan and Little Annie die and not one of us could finish reading it aloud through our sobbing. Finally, my dad had to read it to
us and even he got choked up!

4. If Sprite could change just one thing about you, what would that be?
Sprite would love it if I let him sleep on my legs. I think he feels secure that way, almost like a little nest. However, I can't stand to have my legs trapped. I let him do it on naps but not during the night. I think he'd definitely like to change that rule! And maybe get a few more jellybeans now and then :)

5. In five words, tell us what Sprite means to you:
He's challenging, kooky, sweet, innocent, and very special.

I'd say you're both very special, and an inspiration to us all. Be sure to check out Cindy's website to find out more about her and her books!
Posted by Bobbie Pyron at 2:28 PM 6 comments: 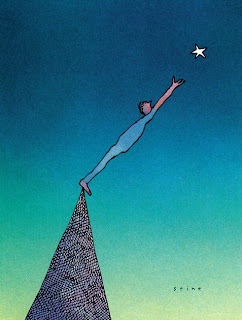 I'm not much of a leaper. I like my feet on solid ground. I suppose this is because I had a rather chaotic, and at times, desperate childhood. And being that childhood is a time when we have very little control over what happens to us, in my adult life I've liked things, well, predictable.

But two weeks from today, I'm taking, what is for me, a big leap of faith: I'm leaving what has been a very stable, predictable, and rewarding career as a librarian and becoming a full time writer. I had decided a while back that when I sold my fourth book (which I have, and more to come on that soon!), I'd leave the library system. It's just getting too hard, with soon-to-be-four books to promote, and more books I want to write, to shoehorn everything in around my job.

I'm terrified, yes. I love the regularity of my paycheck, and I love the structure of going to work. On days when writing feels like something I'm a total loser at, I love going to work and feeling like a success. And I'll miss that delicious moment of connecting a reader with a book.

It also feels like leaving the safe haven of home for me too. Libraries have always had a very important place in my life and in my heart. When I was a painfully shy child, I hid out in the school library rather than eat alone in the cafeteria. Miss Conway, the librarian in my elementary school, allowed me to help her alphabetize the cards for the card catalogue, shelve books, and explore to my heart's content in the library. Later, when we moved yet again when I was at that most painful age of thirteen, I again hid out in the school library rather than endure lunch alone in the school cafeteria. I've alway, always felt safe and secure in libraries. And I'm in good company too. Jack London had a terrible childhood and found haven in his local library. Ray Bradbury is famous for saying, "Libraries raised me." Me too, Ray, me too.

But it's time for me to leave that safe shore and head out for the life of a writer. I owe it to my books and all the stories yet to be told. I owe it to the writer in me.