Fido and Friend in Five: Alan Lazar and His Pack of Poodles!

One of the things I've enjoyed so much about doing this blog over the past ten months is all of the interesting new friends (both four-footed and two) I've made. So I'm happy to start out a whole new year of Fido and Friend in Five by introducing you to a very special Fido and Friend guest!

Alan Lazar didn't start out as an author. Alan was born in South Africa where he played keyboard and produced with the multi-platinum selling band Mango Grove. The band had the distinct honor of performing at the inauguration of Nelson Mandela. He later traveled to the U.S as a Fulbright scholar and got his MFA at the USC Film School. Alan has scored more than 30 films and TV shows including (hold on to your hats) Sex in the City and Real Housewives of Beverly Hills. Seriously! Didn't I tell you I've met the most interesting folks through this blog?
Now Alan has turned author. His first book, Roam, just came out with Simon and Schuster. Roam is an adult novel after my own heart. It's the story of the amazing bond between a young dog, Nelson, and his Girl. One day, a young, curious Nelson follows his nose through the gate, out of his yard and away from his beloved Girl for eight years! You'll be amazed how many miles that dog travels during those years! And the really cool thing about Roam is Alan wrote a seven-part soundtrack to go along with Nelson's adventures which is embedded in the text. Can you believe that?
Alan lives in Los Angeles with his family and three poodles, Nelson, Chicky, and Milan. Let's meet this Renaissance man and his pack of poodles in today's Fido and Friend in Five. 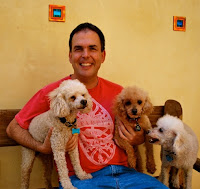 1. How did you and your dogs find each other?  We have three dogs--the "real" Nelson, Chicky (short for Chiquita Lulu) and Milan. All three are poodles--Nelson and Chicky are apricot in color, and Milan is white. At the time our dogs entered our lives (Chicky is almost 20 now), we regrettably didn't know much about animal rescue efforts, and so Nelson and Chicky were purchased from pet stores. Discovering poodles was a big deal for me, as they're hypoallergenic. I adore all dogs, and regularly find myself sneezing from hugging long-haired dogs I shouldn't. So finding out I could live with poodles quite happily was big news for me.
Nelson and Chicky bred, and had five pups, one of which we kept: Milan. She was first out in the litter and a voracious eater. Shortly afterwards some friends educated us about why breeding was not a good idea, and all three of our dogs were fixed. Although we wouldn't breed again knowing what we know now, it has been special seeing Milan grow up with his mom, Chicky. They still sleep together every night, and Milan often lies on her back and lets Chicky lick her just like when she was a pup.

2. What makes your dogs tails wag?  Seeing one of the family enter the kitchen is generally enough to get our dogs' tails wagging furiously in the hope of a tasty morsel. Hearing their leashes clink as we take them out of our special dog closet is also enough to cause an eruption of happiness from our three pooches in anticipation of a walk. But most of all, it's a family member close by, ready for a cuddle, that makes their tails wag.
3. What's your all-time favorite dog book?  101 Dalmatians. I loved the story when I was a kid, and still love it! Cruella da Ville remains one of the most awesome villains (villainesses?) out there. I love the way the smart canines outwit her. If it wasn't for my allergies, I'd own a Dalmatian.

4. If your dogs could change just one thing about you, what would it be?  I think all three of our dogs would prefer I didn't have to work, and could just spend all my time with them.
5. In five words, tell us what your dogs mean to you:  Daily reminder what love is.
Thanks to Alan, Chicky, Nelson and Milan for visiting with us today! Be sure and check out Alan's website to find out more about him. You can also see the different jacket covers for ROAM for the foreign editions, and see what Alan's doing to help dogs less fortunate than his.


Sadly, Alan just informed me that Chicky recently passed away. He and the rest of the family miss her terribly. I want to dedicate this post to the sweet Chiquita LuLu, always and forever in her humans' hearts.
Posted by Bobbie Pyron at 9:37 AM