In Praise of Shelties

In honor of the Westminster Kennel Club Dog Show wrapping up today, I wanted to sing the praises of my breed of passion: Shetland Sheepdogs. You might know them as miniature collies or "Little Lassies" but they are a breed distinct unto themselves.

The sheltie evolved from a mix of several different breeds, including the tradition rough collie, on the windswept Shetland Islands off the northern tip of Scotland. They were bred to herd the smallish sheep and to guard the herders homes. Thus the reason for the sheltie's trademark piercing and enthusiastic bark! The sheltie was bred to live in rough elements (thus there amazing double coat) and move with speed and agility over crags and rocks and gorse and stuff. No doubt that's why today's shelties excel in agility competitions.

Unlike a lot of other herding dogs way back when, shelties
lived with their people rather than with the livestock. It's why the sheltie in famous for not only its keen intelligence but also for its love and devotion to her people. I always tell people, you haven't been loved until you've been loved by a sheltie. 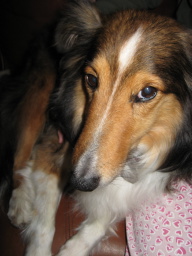 When I was shopping my book, A DOG'S WAY HOME to agents, one wrote me back and said she loved the story and the writing was great, but couldn't I make the dog a Golden Retriever rather than a less "popular" breed like the sheltie. I about laughed myself silly trying to imagine the happy-go-lucky, don't-worry-be-happy Golden braving bears and hunters and starvation and brutal winter elements just to get back to "his girl"! As many good Golden Retriever friends as I have, I just for the life of me cannot imagine that. A sheltie, on the other hand (or paw) would. They may be standoff-ish with strangers, but every fiber of their being belongs to their person and their family.

I'll leave you with an excerpt from A DOG'S WAY HOME. In this passage, Tam, the devoted sheltie of Abby, is high in the Blue Ridge Mountains in the dead of winter. He's starving and just about worn out from the hundreds of hard miles he's traveled:
Tam limped over to the lichen-covered outcropping and sniffed the damp moss. It smelled vaguely of skunk, but not too recent. Tam lay down with a sigh and licked the feeling back into his paws, then pulled the sticks and leaves from his tail. His hip still hurt from his fight with the eagle.
Tam watched the moon rise above the far ridge, hanging full and golden between two peaks. All the night creatures stirred around him; a fox barked in the hollow below the road.
Many times Tam had watched the moon with his girl. Sometimes, they watched from the front porch, with the sound of crickets and the big man's fiddle. Other times, they watched from the window seat in her bedroom. Tam had never known why the girl watched the moon with such longing. It had not mattered to him. He loved the moon because he loved the girl, the girl who held him close as she gazed into the night sky. He'd listen to her steady breathing, the thump thump of her heart. Her heartbeat had filled his world. 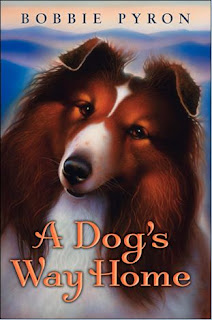