I have the great good fortune to live in a dog-loving community with its own amazing animal rescue organization, Friends of Animals Utah. I've worked as a volunteer with them for many years and have heard some truly inspiring rescue stories. This is one of them. Every year, FOA Utah has a fundraiser (the emphasis on Fun!) called Bark in the Park. At Bark in the Park, they honor one of their amazing rescues. This year it was Big Ben. My BFF, Charlene Brewster, is my guest blogger today, telling Ben's story. Get your hankies ready!

Every year we feature one of our rescued dogs on our race shirt.  This year, the dog is “Big Ben, the Miracle Dog” and the tag line is “Courage to Walk, Courage to Run.”  He has been an inspiration to many and we thought we would tell you his story.

November 25th, 2012 was a Sunday.  That was the day a young Great Pyrenees was hit by a car out on Route 248 near Stock Lumber.  He appeared out of nowhere and jumped in front of a car –  there was no way to avoid him.  The driver who hit him stopped as did several other people.  It was apparent he was badly injured.  He was in much pain and couldn't use his back legs.  There are many dogs used in the ranching community that are “free range” – guiding and guarding livestock with little or no human interaction or supervision.  This dog was one of them.
Many ranching dogs are not considered pets.  They are tools of the trade and treated as such.  Basically, if your shovel breaks and it costs more to fix it than buy a new one, then you throw out the broken one and get yourself a new shovel…  That was exactly what the rancher wanted to do with this broken dog: he wanted him shot by the sideof the road.

By this time, Animal Control, local veterinarian, Carl Prior and Friends of Animals were on the scene.  Dr. Prior and the folks gathered around wanted to give the dog a chance.  Worst case, he would be humanely euthanized in Dr. Prior’s office.  But maybe, just maybe…  there was a chance that he would make it.  He deserved that chance.  After more than a few tense moments, the rancher relinquished the dog to Animal Control and Friends of Animals Utah took responsibility from there.
The badly injured dog could not walk.  He did have a small fracture in his spine, but Dr. Prior was quite sure that given time for the injury to heal and the swelling to go down in his spine, he may very well walk again.  He was given the name Big Ben.

Now keep in mind, this dog had not spent much time with people and had probably never been inside a building or house for any amount of time ever in his life.  In a tremendous amount of pain and surrounded by strangers, you might think he would lash out in fear or mistrust.  That never happened.
He spent more than a month at Park City Animal Clinic. For the first few weeks, he could not walk.  He had to be helped outside and to be moved into new positions.  He learned to use a doggie wheelchair and continued to heal.  Slowly but surely he began to use his back legs and eventually take some steps.  He grew stronger.

Word got out in the dog community about this amazing dog.  People who heard about Ben would stop by the clinic and visit him.  People donated funds to pay for his medical care.
There were several people who were truly his guardian angels.  One of the people who stopped to help the day of the accident was Billie Harsch.  She visited Ben every day at the clinic during his recovery and rallied the community around his story with her facebook reports on his progress and fundraising to pay for his care.  Fox 13 TV station did a story about him and Ben soon became a local celebrity – everyone wanted to know how Ben was doing. 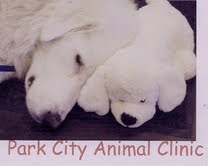 When he was able to walk pretty well on his own, Ben went to the first of several foster homes.  The Bednars with Active K9 took him home for Christmas.  He then spent several months with Kim Brown and George Forbes at their house.  Utah Pet Rehab donated rehab services to help him get stronger and learn to walk properly.  In late February, Ben went to a new foster home.  Colleen Keblish and her family opened up their homes and heart to him.  He is still there today, not as a foster but as a permanent part of their family.  They have a small ranch in Silver Creek and he gets to run, swim and have fun every day.

So many great people came together to give this dog a chance.  In his honor, a fund has been started at Friends of Animals Utah called Ben’s Bank.  It's money that can be used to help badly injured or sick animals who need special care.  Who need a chance.  If you would like to contribute to Ben’s Bank, please click here.

Is that an amazing and inspiring story or what?! Please share with your friends and consider donating to Ben's Bank. Any donation will be tax deductible.
Posted by Bobbie Pyron at 7:43 AM