Fido and Friend in Five: Lisa Rogak and her pack of friends!

There are a lot of really cool and interesting things I could tell you (and will tell you) about author Lisa Rogak, and here's one: she drives a red hearse--yes, I said a hearse--named Ruby. Ruby is, in fact, the seventh hearse Lisa has had. Why drive a hearse? Because, as well as being a prolific writer of nonfiction, she's also an accomplished musician and a hearse is, well, roomy. But really, as Lisa explains on her website, "Hearses get in your blood." Well, sure. I knew that.

Lisa has been an author and journalist for thirty years and has published over fourty books. She's covered everything from sabbaticals to baby names to funeral food customs. The last few years, she's primarily focused on writing biographies, including one on Michelle Obama and Shel Silverstein. Her 2008 book, Barack Obama In his Own Words, hit the New York Times Best Seller List. Her biography, Haunted Heart: The Life and Times of Stephen King, was nominated for an Edgar. Lisa had also written two books about dogs--Dogs of War and most recently Dogs of Courage--which is how she and I found each other! She emailed me and said, "Hey, would you like to read Dogs of Courage" and I emailed back and said, "Heck yeah, and by the way, do you have a dog" and here we are!

Lisa is a woman of great curiosity and a great amount of energy. She once started a greeting card company for dogs and cats, bought and sold vintage funeral equipment (who does that?), and served as a ghost writer. She's a classically-trained pianist who also plays jazz and blues on an upright bass. Hence the need for a roomy car, so why the heck not a hearse?

Lisa has lived the vagabond life, traveling far and wide. For that reason, she is not, alas, owned by a dog. But she is the enthusiastic "Aunt Lisa" to a pack of various friends dogs. Let's meet this fascinating lady and her four-footed buds in today's Fido and Friend in Five!

1. How did you and these dogs find each other?  Currently, to my great dismay, I am owned by no dog of my own because I travel so much. So I serve as Good Mommy to two dogs in New Hampshire I visit frequently, who own a friend of mine who's consequently known as Bad Mommy. Cosmo--aka Little Shit, Napoleon, Haggis, or GETOUTTATHEKITCHEN--is a rescued Lhasa Apso about 7 years old. Sam--aka Bear or Idjit--is a rescued Boykin spanial mix from South Carolina who's around 5 years old. I am also Crazy Aunt to a Shih Tzu named Reagan, who I rescued and delivered to a long-time friend back in 2007. Dog and human were joined at the hip within five seconds of meeting.

When I'm home in Berkley, I walk dogs at the local shelter.

2. What makes these dogs tails wag?  For Cosmo, it's when I'm in the kitchen. He's so food-driven that he's constantly trying to trip me or distract me when I'm cooking so I happen to drop something. For Sam, it's when he sees me put my running shoes on. He's always good for a run that's about twice as long as I can manage.

3. What's your all-time favorite dog story?  May I humbly suggest my own? When researching The Dogs of Courage, there were so many inspiring stories about how dogs just innately know how to help humans, and they usually know better than the humans in their care. From the highly trained therapy, search-and-rescue and medical detection dogs, to the untrained mutts who will instictively jump in front of a train to save their humans, there's no shortage of great dog stories out there, with more being created every day, everywhere.

4. If these dogs could change just one thing about you, what would it be?  To live with them full time because I spoil them rotten! Ergo, the Good Mommy moniker.

5. In five words (or more) tell us what dogs mean to you:  They remind me not to sweat the small stuff or the big stuff, for that matter. There's a great passage I include in Dogs of Courage that sums it all up: "Everybody has to deal with their own mortality. Dogs make us do that," said Larry Madrid, animal trainer for movies including Marley and Me. "They bring so much pleasure to your life, but you look back at the great dogs you've had, the great times, and realize, 'Geez, they only live about ten years.' So make the most of those years. Dogs do." 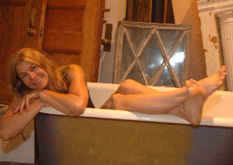 Thanks so much to Lisa Rogak for sending me her truly inspiring book Dogs of Courage! I'm serious when I say be sure to visit her website. It is really funny and amazing! If you don't laugh out loud when you read parts of it, there's something wrong...
Posted by Bobbie Pyron at 8:24 AM