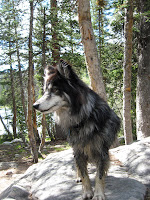 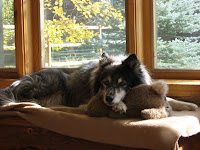 I had a sheltie mix named Tulla ("Toola") for almost seventeen years. When she passed over the Rainbow Bridge, my heart was utterly broken. She had been with me through my first marriage, divorce, ten years of "just us girls" and then re-marriage. Finally, after eight months dog-less, I started thinking about adopting another dog. I contacted a friend of mine at a no-kill animal rescue and told her I was looking for another sheltie mix, or a purebred sheltie. About a week later, she emailed me and said they'd just pulled a sheltie mix from a "kill shelter." She attached a photo of this so-called "sheltie mix." I laughed when I saw it: there was no way this dog had any sheltie in her. She looked more like a fox with a blue merle coat. Still, my husband said it wouldn't hurt to go take a look. Yes, the infamous going to "just look." As soon as they let this wild, scraggly dog into the room where we sat on the floor, she threw herself into my husband's lap, belly up, and gazed into his eyes with pure adoration. As you can guess, we came home with her. The shelter had named her Calamity Jane. Since we were adopting her just days before Halloween, my husband named her Boo. At first, I thought it was a stupid name. But it really does fit her somehow! 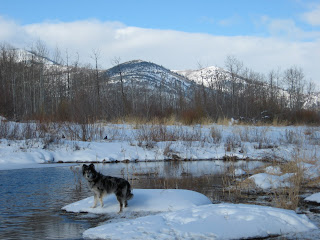 From the beginning, Boo was not an easy dog. For starters, she was sick and emaciated from living on the streets. The other problem was convincing her that our cats were not fast food! But I think my vet summed it up best. When he first saw her, he said, "Where'd you get that coy-dog?" In other words, I had adopted a dog who is part coyote. Then he said to me, "She will be the smartest dog you've ever had, which can be a blessing and a curse." No truer words were ever spoken. I've never had a dog (and I've had lots of really smart dogs) who can problem solve the way she can. You can just see those wheels turning behind her amber eyes. In some ways, she was the easiest dog I've ever trained because she picked things up so fast; in other ways, she was very hard to train because she's, well, part wild.

Of my three dogs, she's the most sensitive to pack dynamics. She loves us and is not at all happy when we are not all together. She even loves the cats. She's terrified of fireworks but will charge a bull moose. She loves her toys with abandon, and certain people. She was the model for Tam's friend, the little coyote, in A Dog's Way Home. 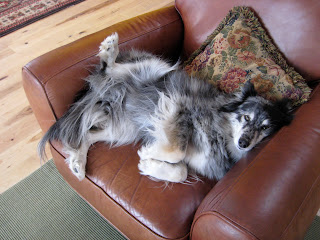 Now at age eleven, Boo doesn't chase deer quite the way she used to. She can't run down a rabbit anymore, and the vet says she has a cataract in one of her beautiful amber eyes. But she's still my go-to dog for any outdoor adventure I want to have. She is my muse, my best girlfriend, and my husband's forever dog. She's our Boo.
Posted by Bobbie Pyron at 2:15 PM