Fido and Friend in Five: Nancy Furstinger and pack! 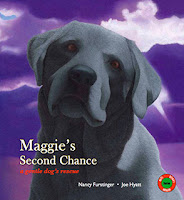 I won't bore you one more time telling you with how I fell in love with the jacket cover of Nancy's new book, Maggie's Second Chance, when it came into the library. I won't tell you how that sweet dog's face on the cover spoke to me, and how I had to read it immediately. Instead, I'll tell you that Nancy has the coolest quote below her email signature. It says, "Think it's tough putting on a condom? Try doing it with paws and claws!" Of course, it's her reminder to spay and neuter your pets, but it cracks me up every time. But that's just Nancy. She's not only the author of over a hundred children's books (many of which are about animals), but she's also a tireless advocate for animal rescue. She's very involved with her local rescue. She also donated proceeds from her book, Catskill Creatures, to Heart of the Catskills, the rescue where she adopted Splash. Her new book, Maggie's Second Chance, is the wonderful story of an abandoned, pregnant lab mix who inspires a whole town to build an animal shelter. And it's based on the true story of fourth graders in Texas who founded a shelter in their town! Great reviews in both School Library Journal and Kirkus have called Maggie's Second Chance "inspiring" and "heartwarming." 1. How did you and your dogs find each other?  All three of my dogs are rescued. With Splash, I volunteered at adoption events for Heart of the Catskills (Delhi, NY), where we had an excellent track record of adopting out spotlighted dogs. I fell in love with this wonderful Rottweiler mix and was crestfallen when he was adopted. The match was not made in heaven--Splash was too young and wild and this person was old and sedentary, so he was quickly returned. I knew he was mine (as long as he bonded with my dog, Diamond Dreamer). Splash and Diamond were inseparable until she passed from lymphosarcoma. We were both devastated , and my grief by Splash's refusal to eat and mopping around. So I headed to Petfinders.com (always dangerous) and, based on a postage-sized photo and brief bio, found Lacy. She and her doggy husband were being given up because her family was divorcing. Her "husband" had been adopted already; Splash and I drove six hours to see if it was a love match. Lacy sniffed Splash, jumped in my car and never looked back. Jolly was abandoned in a house around the corner where the people were evicted. I rescued her theoretically to foster, but was a goner in a few hours: she fit into my household (including the house rabbits) instantly! She was the third dog I never knew I needed, and the star of Maggie's Second Chance.

3. What's your all-time favorite dog story?  Just one? Darn, well you're going to get more than that! As a kid, I loved Lassie Come-Home and lived for the Sunday night TV show. Later, after reading Watership Down, I picked up Richard Adams' book, Plague Dogs. As an animal rights advocate, I was blown away by this brilliant, heart-wrenching book. I also adore all of Alexandra Day's "Carl" books, which (like Splash) serve as an ambassador for the misunderstood Rottie breed. Plus, James Heriot's Dog Stories--endearing "tails" to bark about!

4. If your dogs could change just one thing about you, what would it be?  Ditch the laptop and stop spending so  much time with those long-earred creatures (otherwise known as bunnies) so all day, every day, can be doggy playtime!

5. In five words, tell us what your dogs mean to you:  Dogs=love magnified 7 times (based on the myth that one dog year equals 7 human years).

Thanks so very much to Nancy and her pack for taking time away from playtime and bunnies to visit Fido and Friend in Five! To find out more about Nancy's books visit www.thegryphonpress.com
Posted by Bobbie Pyron at 7:35 AM