Fido and Friend in Five: Jeff Crosby, Baron and Fritz! 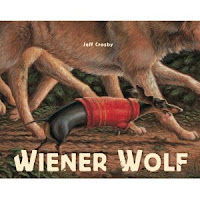 So this is an exciting first for Fido and Friend in Five: an author/illustrator in the spotlight! When Jeff Crosby's new picture book, Wiener Wolf, arrived in our library, all of us dog-loving librarians crowded around the book. How could we resist with that cover?! And then we (well okay, I) read it aloud and we had a fit of the giggles over this story of a little dog with big ambitions.

Here's another really cool thing: Jeff's wife, Shelley Ann Jackson, is also an amazing illustrator, and they've even collaborated on some books, including Little Lions, Bull Baiters, and Hunting Hounds: A History of Dog Breeds. Oh, and their daughter, Harper. This talented couple also share their home with two Wiener Wolfs, Baron and Fritz, and a shih tzu named Millie. Let's find out a bit more about Jeff Crosby and his little muses in today's Fido and Friend in Five spotlight:

1. How did you and your dogs find each other?  Baron, the eldest, was bought from a questionable breeder back before we knew better (we forgive you). We were living in a small New York apartment at the time and wanted a couple of small dogs. My family had always had dachshunds, so that was what I wanted. I was looking for a mini dapple and that's what the breeder said Baron was. Baron turned out to be a red twiener. Little Fritz is a rescue. My brother, Tim, found him on the street, his wee heart riddled with worms. The vet fixed him up and my brother took him home. Tim has several large dogs and Fritz didn't quite fit in, so he gave him to my parents who foster wiener dogs. They had four at the time. Fritz made five. It was a good fit until the other male started attacking Fritz after walks. That's when we offered to take him. We also have Millie, the shih tzu, who we bought at the same as Baron. She is the exact opposite of the wieners!

2. What makes your dogs tails wag?  Food, food, and food--but not necessarily in that order. They also was their tails when we come home, when we talk to them, and when we play with them. Fritz wags his tail  for walkies, but Baron just slinks off to a corner to hide.

3. What's your all-time favorite dog story?  Hmmm....I gotta say Where the Red Fern Grows, by Wilson Rawls. I read it as a boy and it made me cry. I hadn't realized the power of books until then. As far as picture books go, I do enjoy reading Dan Yaccarino's Unlovable, to my four-year-old daughter.

4. If your dogs could change just one thing about you, what would that be?  Daddy should work less and play more.

5. In five words, tell us what your dogs mean to you:  They're family, friends, and inspiration!

Thanks so much to Jeff and his pack for being in the Fido and Friend in Five spotlight! Be sure to check out his new book, Wiener Wolf. It's a hoot!