Fido and Friend in Five: Dori Butler and Mouse!

It goes without saying, I'm a total sucker for a good dog story. So when I stumbled upon Dori Hillestad Butler's adorable early reader series, The Buddy Files, I was delighted! These funny, charming books feature a lovable Golden Retriever named Buddy who's gone from shelter dog to super-sleuthing therapy dog. In the first book of the series, The Case of the Lost Boy (which won an Edgar Award), Buddy is adopted by a loving new family after mysteriously losing his old one. In the newest, fifth book in the series, The Case of the Library Monster, Buddy discovers a blue-tongued creature in the public library where kids read to him. What is this terrible, blue-tongued monster? Buddy's on the case! Dori is one of those authors who must never sleep (unlike yours truly) because she writes all kinds of books! Not only does she write the Buddy series, she also writes novels for middle graders, teens, and nonfiction. And on top of that, she and her sweet Mouse are a therapy team. So let's meet this dynamic duo! 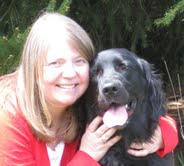 1. How did you and Mouse find each other?  In the fall of 2008, I found out my older son would be moving half way across the country. While I was happy for him, I was kind of bummed for myself. I also realized it wasn't going to be long before my younger son would move out too, and I need something new in my life to make up for this impending empty nest. I'd read lots of articles about therapy dogs, so I decided the new thing I'd get involved in was therapy dog work. Unfortunately, my 14-year-old, arthritic, timid cocker spaniel was not a candidate, so I started checking PetFinder www.petfinder.com every day. Specifically, I was looking for a Golden Retriever (even though any breed can be a therapy dog). One day, I came across a listing for "Mowgli", a black GR mix, who they said "never met a person or animal he didn't like." I had a feeling this was my dog. The shelter brought him to our house so he and they could meet all the two-footed and four-footed residents. Mowgli was HUGE in person--way bigger than I expected him to be! But he was SO nice, so friendly and seemed smart and easy to train. He and Molly (our other dog) liked each other, my kids fell in love with him, and my husband didn't say no--so I said yes! We changed his name because Mowgli was too close to Molly. What better name for a 100-pound dog than Mouse! It's a great conversation starter when we enter a new therapy situation. Mouse and I mostly do the R.E.A.D. program in libraries, so kids can come in and read to him. We're also going to participate in a camp this summer for special needs kids.

2. What makes Mouse's tail wag?  When I come home. When I get ice from the freezer (he knows I'll always toss a cube to him). When I grab a Kong Wubba for a game of tug. When I say any of the "magic words": walk, outside, play, dog park, or treat.

3.  What's your all-time favorite dog story?  Shiloh. It's probably the book I've reread the most as an adult.

4. If Mouse could change just one thing about you, what would that be?  That I would never leave the house without him.

5. In five words, tell us what Mouse means to you:  Enthusiastic, unconditional, tail-wagging LOVE!


Thanks so much for taking time out to talk with us on Fido and Friend in Five, Dori and Mouse! I absolutely LOVE the fact that you do therapy work together! To find out more about Dori and her books, visit her website at www.kidswriter.com
Posted by Bobbie Pyron at 10:35 AM