A Big Time in the Big Easy! 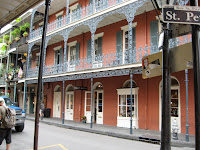 As some of you know, I went to the American Library Association's annual conference in New Orleans last week. My husband Todd and my youngest step-boy, Brian, came along so we could make a family trip out of it. I hadn't been to New Orleans since I was in high school (and no, I won't tell you how long ago it was!) but was eager to spend time in this unique city again--especially post Katrina. So we packed up our bags and books and flew to Louisiana a couple of days ahead of the start of ALA.

Our hotel (which thankfully had a pool) wasn't far from the French Quarter. Much to Brian's dismay, we walked every square inch of The Quarter! Of course, our first morning (Thursday) we had to get up early and walk along the Mighty Mississippi to Cafe Dumond for their famous beignets. Oh what a wonderfully sinful, warm confection of hot, puffy dough and powdered sugar! Then we spent the rest of the day exploring The Quarter and French Market, visiting various museums and just absorbing (with the help of the heat and humidity) the unique gumbo of smells, sounds, and people that are N'Orlins.

Friday, we loaded on a van with a bunch of other curious folks and headed about 45 minutes out of the city for a swamp tour! I will admit, as much time as I've spent living in the south, I've never been in a real swamp. We learned all about the unique ecosystem, the various birds and critters, and the plants (such as wild rice) folks who used to live off the swamp depended on. And then there was the gators! Even my unimpressionable 13-year-old boy got wide-eyed over all the different sized gators we saw. One was the large and lovely Cindy.

Starting early Saturday morning, I put on my author's hat and got to work. I was invited to a lovely breakfast hosted by HarperCollins where I got to visit with lots of other librarians. Then it was over to the Convention Center for a book signing at the HarperCollins Children's booth to sign A Dog's Way Home. It was great! I loved hearing the dog stories everyone who bought a book and had me sign told me. I even had a little bit of a line, but unfortunately, no photos. After that signing, I made my way over to the WestSide booth to sign the newly released paperback version of The Ring. Boy, did I have a great turnout! I signed books for people from all over the world. Really! That night, the WestSide gang had dinner together. I'm fortunate to be with such a great group!

Sunday bright and early, I was part of a rather bizarre but fun "speed dating" event featuring young adult authors! We went from table to table pimping our books and ourselves to a table full of librarians in four minutes. Then the whistle would blow and off you dashed to the next table! I think I had a little bit of an edge because I was able to open my spiel with, "The first thing I want you to know about me is I'm a librarian." That really got their attention! By the time it was over, I'd chatted with seven (or was it eight?) tables and my voice was gone. But what fun! After that, it was off to The Quarter again to have a late breakfast with my ever-lovely editor, Molly O'Neill.

We arrived back in Utah very, very late Sunday night to three ecstatic dogs, two cats eager to go outside and cool air and no humidity. It was good to be back, but boy did we have fun.
Posted by Bobbie Pyron at 11:58 AM