Fido and Friend in Five: Donna McAleer and Col. Thayer! 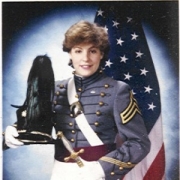 In October, I was asked to be one of three featured authors at the annual fund raiser for the Utah chapter of the American Association of University Women. The three of us were to talk on the theme of finding our passion. The other two authors, both amazing women with recently published books, were Jennifer Jordan and Donna McAleer. As the three of us talked before the program started the subject inevitably came round to dogs. As it turned out, they both have much adored dogs. I knew there was I reason I connected with them both right away! 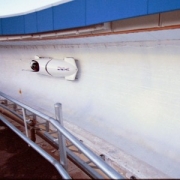 Now when you first meet Donna, she is rather quiet and just sort of taking in everything around her. So imagine my surprise when I learned straight away that she is a West Point graduate and served as an Army officer! Okay, and not only is she a West Point grad, she finished 4th in the women's bobsled trials for the 2002 Winter Olympic Games team! Donna is also a ski instructor, and inspirational/motivational speaker. In the past, she's also worked as a non-profit executive director, high school coach, and lots of other things.

Donna recently added author to that list of achievements. Inspired by her time at West Point and as a U.S. Army officer, she wrote Porcelain on Steel: Women of West Point's Long Gray Line. Her book is an insider's look at that male-dominated, storied institution that produces leaders for our military and nation. She also presents the long-overlooked history of women at West Point. Porcelain on Steel was the 2010 Gold Medal Winner for the Military Writers Society of America.

Donna, her husband, and daughter Carly, share their home and love of the outdoors in Park City with their faithful companion, Colonel Thayer. Donna took out time from her very busy schedule to talk with me a bit about her very sweet Colonel. 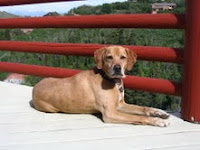 1. How did you and Colonel Thayer find each other?  At a summer bar-b-que. In the spring of 2000, Ted, my husband and I began talking about getting a dog. Park City, Utah is a dog lover's paradise with lots of trails and open space. Invited to a bbq by my yoga instructor, we met our soon-to-be faithful four-legged companion. At some distance from the grill, several bales of hay made a large circle where two playful puppies wrestled and looked longingly for some human affection and belly scratches. They caught Ted's attention. He asked Natalie, the host, to whom the cute dogs belonged. Natalie explained that the neighbor had an unexpected litter (a mix of Vizula's and yellow labs) and was looking for good homes for the puppies. And then asked if he wanted one! Ted found me and said, "You have got to see these five-week-old puppies looking for a home." Ted turned to me and said emphatically, "We have to take one!" Astonished, I replied, "You are crazy! I'm leaving for a four-week training camp in Lake Placid (for bobsled) in less than a month." He responded, "You never do anything spontaneous. We have to take one. You drive and I'll hold the dog." Some people leave parties with full bellies, with new friends, with a little too much alcohol--we left with a puppy. Upon arriving at home, we realized we had nothing for a puppy. We made a bed out of a box and blanket. The puppy whimpered nearly all night. The next morning I called Natalie to double check that the dog's owner was truly looking for a family. Natalie assured me they were. Then she asked, "What did you name him?" Quickly I responded, "Thayer." After a long pause, she said, "As in Colonel Sylvanus Thayer?" "Exactly," I said. "How do you know about him?" "I'm a direct descendant of his," she said. "Thayer is my middle name" We were meant to be together! 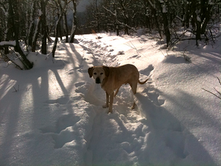 As an aside, Colonel Sylvanus Thayer (June 9, 1785-Sept. 7, 1872) is known as "the Father of West Point." Both Ted and I are graduates of West Point. We wanted our canine companion to have a name of military historic significance. Eisenhower had too many syllables.

3. What's your all-time favorite dog story?  It's too difficult to pick just one! Call of the Wild, by Jack London, Stetson the Park City Dog, by Jeanne Heil, a wonderfully illustrated book about an abandoned dog who becomes a ski patrol dog in Park City. The Art of Racing in the Rain, by Garth Stein. Enzo, the dog narrator of the book is soul mates with Thayer.

4. If the Colonel could change just one thing about you, what would it be?  That I ran faster and didn't spend so much time in front of an illuminated screen, writing.

5. In five words, tell us what Thayer means to you:  Unconditional love, steadfast companionship, never-ending entertainment and absolute confidence. I tell Thayer everything! (am I permitted to be wordy?)  Yes :)


To find out more about Donna and her really inspiring book, visit her website. Truly, I just touched the tip of the iceberg! To read an in-depth review of her
book check out http://jwlbooks.com/jack-london-reviews/porcelain-on-steel-women-of-west-points-long-gray-line/
Posted by Bobbie Pyron at 12:34 PM