Another Star for THE DOGS OF WINTER! 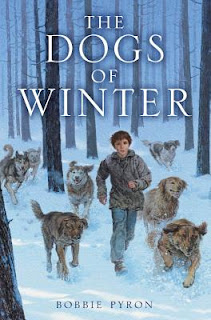 I'm so happy to announce that my new book, The Dogs of Winter, has received its second starred review! The first one was from the notoriously-hard-to-please Kirkus Review. Now, The Bulletin for the Center of Children's Books has given my book its second star. And I think it's also one of the more astute reviews:

Pyron, Bobbie The Dogs of Winter. Levine/Scholastic, 2012 [320p] Trade ed. ISBN 978-0-545-39930-2 $16.99 E-book ed. ISBN 978-0-545-46985-2 $16.99 Reviewed from galleys   R* Gr. 5-9 In the aftermath of the fall of the Soviet Union, life is a struggle for many poor Russians. Five-year-old Mishka (his nickname from his mother) has been ejected from his home by his mother’s brutal boyfriend, who has apparently killed Mishka’s mother, and he’s struggling to survive on the streets of Moscow rather than end up in the city’s legendarily savage orphanages. Initially connecting with a crowd of street kids who eke out a living in one of the city’s railroad stations, gentle Mishka is upset by their violence and immorality, and he’s increasingly drawn to the friendly yet cunning dogs that are also scavenging to survive. Soon he forsakes human company entirely and becomes part of the dog pack, helping them find food and benefiting from their warmth and protection.
As a note explains, Pyron bases her story on a real child, one of Moscow’s many street children in the 1990s, who lived for two years with a pack of dogs (a story also explored in Eva Hornung’s adult title Dog Boy). She’s used that story to create a compelling and highly original fiction, with Mishka’s experiences somewhere between Holman’s Slake’s Limbo (BCCB 4/75) and The Jungle Book (indeed, the police trying to catch him call him “Mowgli”). The underlying picture of the street kids is a grim and affecting one: having few acceptable options, they take refuge in drugs and drink and survive by prostitution and violence—or they don’t survive at all. Mishka’s life with the dogs is actually less feral-seeming than theirs; there’s considerably more affection (he even embraces an elderly dog as a substitute for his kindly late grandmother) and loyalty in the dog pack, and the dog characters are as vivid as Mishka’s human acquaintances. The book flirts with fantasy in Mishka’s communication with his dog compatriots, but even that could be easily construed as his own interpretations. An absorbing account in its own right, this could also partner with Gerstein’s Victor (BCCB 12/98) for two very different looks at (purportedly) wild children. An extensive bibliography about feral children and Russian child poverty in general as well as the book’s particular inspiration is appended. DS