Fido and Friend in Five: Sarah Prineas and Athena!

As most of you know by now, I'm a sucker for beautiful shiny things. Just like a crow, I'm drawn to them. So when we received Sarah Prineas's new book, Winterling, in the library where I work, my eyes lit up. The cover is gorgeous, don't you think? I had to pick it up and hold it, peck at every part of it. And that's when I discovered in the author bio that Sarah has a dog. "Ha!" I said. 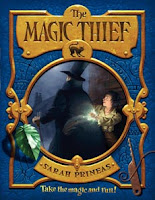 Of course, being that it's a book written by Sarah Prineas, what's on the inside of the book is even more gorgeous! Sarah is an author of extraordinary talent in world-creating. She also has some serious literary chops. Her first book for middle-graders, The Magic Thief, won just about every award and accolade there is, including our very own Beehive Award from the Children's Literature Association of Utah! Do you know how many children we have here in Utah? Lots! And that means lots of children read Sarah's book and voted it the best. Her subsequent books in the series, The Magic Thief: Lost, and The Magic Thief: Found, have delighted many other readers as well.

And now Sarah has a new book, Winterling, which I can't wait to read. Sarah also has a laptop named Pip, a mad scientist husband, two kids (I don't know if they're "mad" too), two cats (one of whom is reported to be rather cranky), and a "goddess among dogs" named Athena, all whom share her life in Iowa. It's a busy time for authors when a new book comes out, so I am particularly grateful to Sarah for taking time out to be in today's Fido and Friend spotlight!

1. How did you and Athena find each other?  Recently, I was reading a memoir about a woman who bonded with her first dog, and she writes about suddenly realizing that she needed a dog. She'd never had one before; there was no triggering event in her life, she just knew. That's how it was for me: suddenly I knew that I needed a dog.

Every couple of days I would check the local animal shelter website, and finally found a chocolate lab mix named Rusty, so my son and I went over to check him out. Of course, he'd already been adopted, so the shelter guy said, "Have a look through our book (a list of dogs at the shelter) and see if any catch your eye." So I get to the last page, and there's the listing for "Toranga," a 5-6 year old Rottweiler brought in as a stray. I'm like, "A Rottweiler? NO WAY!" A former neighbor had had a really horrible, untrained Rottweiler mix, and that had really set me against the breed. Plus you know Cujo was a Rottweiler. But the temperament evaluation for this dog was glowing, so I thought, "Okay, I'll try." The shelter guy went to fetch her, and said, "She's the nicest dog we've got here." I was like, "Oh sure she is." But then he brought her out, and it was love at first sight. I mean, I just knew--this was my dog. Athena.

2. What makes Athena's tail wag?  As Rottie owners say, "If you don't have a tail, wag your butt!" Athena's tail was docked by her previous owners (whoever they were), but she's a pretty intense butt-wager. Rotties tend to bond strongly to their person; she's a bit of a velcro-dog, so she wags for me. She wags like crazy for food and treats, and when other family members come home.

3. What's your all-time favorite dog story?  It's hard to decide! My son is home-schooled, and in the fall we did a unit on dogs, and read a bunch of dog stories and books. Laura Ingalls Wilder's Jack has a place in out heart, but our favorite is probably James Herriot's stories about Tricky Woo, the over-fed, over-pampered lapdog.

4. If Athena could change just one thing about you, what would it be?  She wishes I would let her eat the mail carrier.

5. In five words, tell us what Athena means to you:  I can do it in two: Beloved companion.

Thanks to the wonderful Sarah and goddess Athena for visiting with us today! Be sure to check out Sarah's website to find out all about where she writes and what that crazy invention is her husband is building.
Posted by Bobbie Pyron at 11:53 AM