Lessons from an Old Dog

I live in a town that runs on adrenalin. Road biking, mountain biking, trail running, skate skiing, downhill skiing, snowboarding--everybody is going fast, fast, and faster! Everyone in Park City is in training for something, whether it really is the next Olympics or some long-held dream they've had. The results of this is that people here are very fit, keep many orthopedic surgeons hopping, and don't have time to just stop and "visit."

Now as you may or may not know, I was born and raised in the part of the country that perfected the art of "visiting." Folks in the South love to just sit around on the porch or chat on the sidewalk and catch up. We'll talk about anything--the weather, the kids, the parents, the garden, the dogs, local politics--but never money or religion. Sure we may be in a hurry to get somewhere, but never too busy to stop and talk, even if for just a few minutes. So adjusting to this fast town has been a challenge for me. 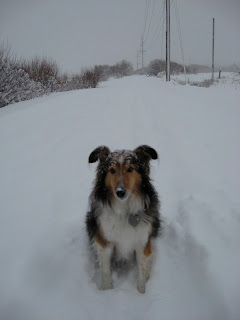 There's a little walk I do every couple of days with my dogs along a beautiful stream near our house. The last couple of years, I've referred to this particular walk as our "Teddy walk." Teddy is my almost 13-year-old sheltie. He's too old now for long or fast hikes, let alone trail running. But this little amble along the stream suits him just fine. There are soooo many new smells each time we go out, so many things to pee on, and oh, the sun feels good on his back! The other two (younger) dogs chase each other up and down the trail or hunt mice over in the field. I amble along with Teddy, letting his nose do for him what his eyes and ears, and hips can no longer do. What he can do is enough.

For the last several years, I've seen a couple running on this trail along the creek almost every time I've been out on it. No matter what the weather (and we get some pretty horrible weather here at 7,000 feet) they were out running what I suspected was about a 5-mile loop. A quick flip of one hand or a gasping "hello" was about all they slowed down for when they'd see me and the dogs. Although once, the woman said to me as she ran past, "You need to run with those dogs!" Of course, she didn't stop so that I could explain about Teddy. About a week ago, I saw someone walking towards us on the trail. When the person got closer, I realized it was the woman from the running couple--and she was not running! She actually stopped to say hello. She told me she'd had knee surgery six weeks before and was unable to run. She whined and whined about how awful life is without running, and how she just hates getting old. 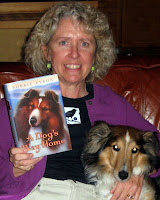 At one point, she reached down to pet Teddy who was nuzzling her knee. "Why he's really a nice dog, isn't he?" she said. "He is indeed," said I. "He's almost thirteen and can't hear a thing. He can't run and chase the other dogs anymore but he doesn't care. He just loves to be out smelling everything and being with me." We all strolled along the stream for quite a while--the two younger dogs chasing and hunting, Teddy, the woman and I talking and taking in small things. When we got to my house, I said to the woman, "I'm sad for you that you can't run, but I've really enjoyed getting to know you!" She agreed. She reached down again and petted Teddy. "I need to learn from this old boy," she said. "I need to learn to not look back at what I used to be able to do, and just enjoy what I can do."

Amazing how an old dog can teach us new tricks!
Posted by Bobbie Pyron at 12:38 PM