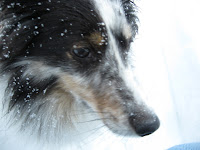 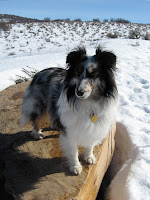 I hadn't really planned on a third dog, although I was suddenly (and sadly) aware that all of our animals (including our cats) were getting older. One day, we were visiting Jim and Barbara of Sheltie Rescue of Utah. Barbara had just had knee replacement surgery and we were stopping by to bring them food and to visit. As always, they had quite an assortment of shelties! They had just a month before pulled three shelties from a puppy mill situation. The dogs had been in bad shape when they came into Barb and Jim's program. They were underweight, skittish. The female was nine years old and still being bred. One of the three was Sherlock. He was the stud of the puppy mill. He came up to us very shyly and pawed my husband's leg. I was struck by how much he looked like a little version of Boo! He was quiet and shy and bossed around by the other dogs. Of course, I was utterly smitten. A couple of weeks later, I brought him home.

One of the things about puppy mill dogs is their lack of normal experience. He wasn't well versed in grass, was terrified of stairs and kept running in to things--particularly the glass sliding door. When I took him in to meet our vet, I asked him to give his eyes a good check. I was convinced he was partially blind. His eyes were, in fact, fine. As our vet explained, because they live in such a confined space most of their lives, puppy mill dogs don't have great depth perception. He assured me Sherlock's brain would develop that particular function just fine. And as always, he was right.

I would love to say adding Sherlock to our pack was seamless, but that wouldn't be the truth. Teddy despised him, and Sherlock (having been a stud) challenged Boo's authority every chance he got. Boo, bless her heart, was patient with him for a while. Then one night in the kitchen, she'd had enough. She threw him to the ground, belly up, and clamped her jaws on his throat. My husband freaked. Sherlock peed on himself, and they've been best buddies ever since. 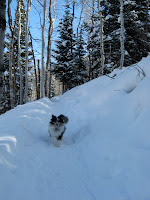 I can't begin to tell you how wonderful and fun and rewarding it's been to watch Sherlock's personality blossom over the last three years! As it turns out, he's quite the little pistol. As if making up for those first horrible three years of his life, he does everything--running, playing, eating, barking, cuddling--with 200% enthusiasm. He loves small children, cardboard toilet paper rolls, tangerines, and our cat, Kami. At six, he's a bit more reflective perhaps, a tiny bit mellower. Would I have three dogs again? Probably not. But Sherlock makes me laugh every day. And I wouldn't trade that or the look of pure joy on his face when he runs for anything.
Posted by Bobbie Pyron at 6:04 PM