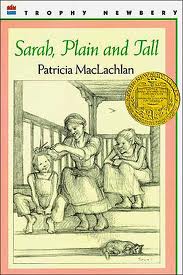 Yes, dear reader, you read that right: Patricia MacLachlan is on my blog! Besides being an amazing writer of books that have become classics, it turns out Patty is a dog person. And so it only seemed natural for my most excellent editor of A Dog's Way Home to ask her to read my book and, if she liked it, to write a jacket blurb for it. So she did, and she did! Do you know what it feels like to have Patricia MacLachlan say she "just loves" your book? I'll tell you: it feels like a million balloons carrying you away. Besides her beloved Sarah, Plain and Tall, Patty has also written many other books including two books of poetry for kids about dogs: Once I Ate A Pie and I Didn't Do It.  I just LOVE those two books! They so perfectly capture the thoughts and feelings of the dogs.

Even with how busy Patty is, she was most willing to take time out to talk with me about her (and her family's) long-standing love for animals and her dogs, Emmet and Charlie.

1. How did you and your dogs find each other?  Ahh, dogs. I have never been without dogs. They are in my history, my parent's history, and their parents. I was, in truth, named after a favorite dog of my mother's! My oldest son, who's lived and worked in Africa for twenty years (with Jane Goodall) moved into a house with seven dogs. My middle son works in publishing, so he doesn't have a dog right now, though in his he wants at least two beagles. My daughter Emily, with whom I wrote Once I Ate A Pie and I Didn't Do It, two picture books about dogs we know and love, has had three rescue dogs in the past years. She has a rescued Great Pyranees who is the sweetest dog I've ever known, even though he's about 150 pounds! She also has a Texas hound. Neo, the Great Pyr, is in a new novel I have coming out called Waiting for the Magic. I have two Border Terriers named Emmet and Charlie. I've had them since they were puppies.

2. What makes Charlie and Emmet's tails wag?  Food and people make their tails wag! They love all people and their dogs. They also like to watch TV. They've been known to howl at Oprah. 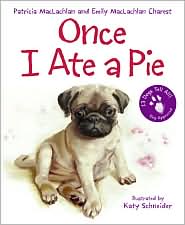 3. If Charlie and Emmet could change just one thing about you, what would it be?  It would be that I have a certain nervous problem that makes me drop food all day.

4. What's your all-time favorite dog story?  Any dog story, including yours! (blush, blush)

5. In five words, tell us what dogs mean to you:  Not sure I can do it in five words, but here's a short story: a dear friend who was my first agent and later my publisher, died suddenly, and I had to speak at his memorial service. I couldn't find anything appropriate to say until I read what one man wrote on his dog's tombstone. This says it all:


Thank you Patty and Emmet and Charlie!
Posted by Bobbie Pyron at 12:21 PM